Strategies for REITs Competing for Capital

Green Street's Advisory Group studied small and mid-sized REITs to compare return profiles with their larger peers and identify characteristics of the outperformers. Return volatility, market capitalization, and common challenges among smaller companies should be considered, but there are also key areas of opportunity to attract institutional investors.

Small and mid-sized publicly traded REITs (defined as companies with $250 million to $1 billion in equity market capitalization) often have difficulty attracting the attention of dedicated institutional investors. “Smaller REITs tend to get ignored in the marketplace probably more than they should,” says Phil Owens, Managing Director of Green Street's Advisory group. That lack of interest can be frustrating for REIT management teams because those sought-after institutional investors have the influence and capital to validate a REIT’s strategic plans and support its ongoing growth initiatives.

Green Street’s Advisory group works with both investors and operators and has found that the most common challenges investors encounter when evaluating smaller companies include a small equity float, high overhead, elevated cost of capital, less well-known geographic footprints, and ineffective market communication strategies. While those are valid considerations, investors should weigh the positive aspects of investing in smaller REITs as well, especially their potential for delivering attractive returns.

Watch this video for additional color from Phil Owens or continue reading.

Elephant in the Room

One of the most significant challenges for smaller REITs is that they have fewer shares trading in the market. That's the “elephant in the room,” Owens says. Their float (i.e. shares available to buy and sell in the market) isn’t as robust as it is for larger REITs. “Institutional investors may like the story, and like the asset class, but if they can't get enough of an ownership position in the company to make it worth their time, they may pass on the opportunity.”

Smaller companies also tend to operate at an overhead disadvantage. General and Administrative (G&A) expenses - essentially a “tax” on shareholders - are usually higher for smaller REITs as a percentage of asset value, and that weighs on their share prices. Furthermore, smaller companies often trade at discounts to underlying value relative to their larger peers. This leads to a higher cost of capital for the smaller companies, which may make it more difficult to compete.

In addition, institutional investors can be wary of portfolios focused on tertiary markets, where smaller REITs often have exposure. Instead, they gravitate toward the larger REITs that tend to target primary and gateway markets, and they are unlikely to take extra time to learn about portfolios outside that comfort zone.

Finally, smaller companies frequently fail to communicate effectively with the market. Small REIT management teams should go above-and-beyond their larger REIT peers when it comes to investor communication efforts. In reality, these companies typically don't have the staff and resources for effective strategic communications in the same way their larger peers do. Additionally, many of the smaller REITs are being run by company founders who often have an entrepreneurial mindset. “The institutional REIT market does not think that way,” Owens says. When trying to appeal to institutional investors and communicate well with the market, “being entrepreneurial can create some blind spots" that most management teams aren't even aware of.

While smaller REITs face these real challenges, many people assume the smaller companies underperform the market and don’t offer as attractive an investment opportunity as larger REITs. This is not necessarily the case. Green Street analyzed five-year total relative REIT returns versus sector averages and found that larger REIT relative total returns are generally centered around sector averages. Small and mid-cap REIT relative total returns exhibit significantly higher variation by comparison. The smaller companies don’t systematically underperform, it’s just that their performance tends to be more volatile. “The smaller REITs had higher highs and lower lows than their larger peers,” Owens says. “There wasn't an underperformance issue. What we found was a volatility issue.” Investors may be able to gain a competitive advantage by identifying common characteristics of the top performing small REITs.

Size isn't Everything, but it's Something.

“There is absolutely an institutional bias toward larger companies,” Owens says. Green Street's Advisory group found that a market cap of above $400 million is the threshold at which active REIT managers start to pay attention. “Below that, there isn't much active manager commitment to smaller REIT investment,” Owens says. Furthermore, companies with market caps of at least $1 billion generate significantly greater interest from institutional REIT managers. 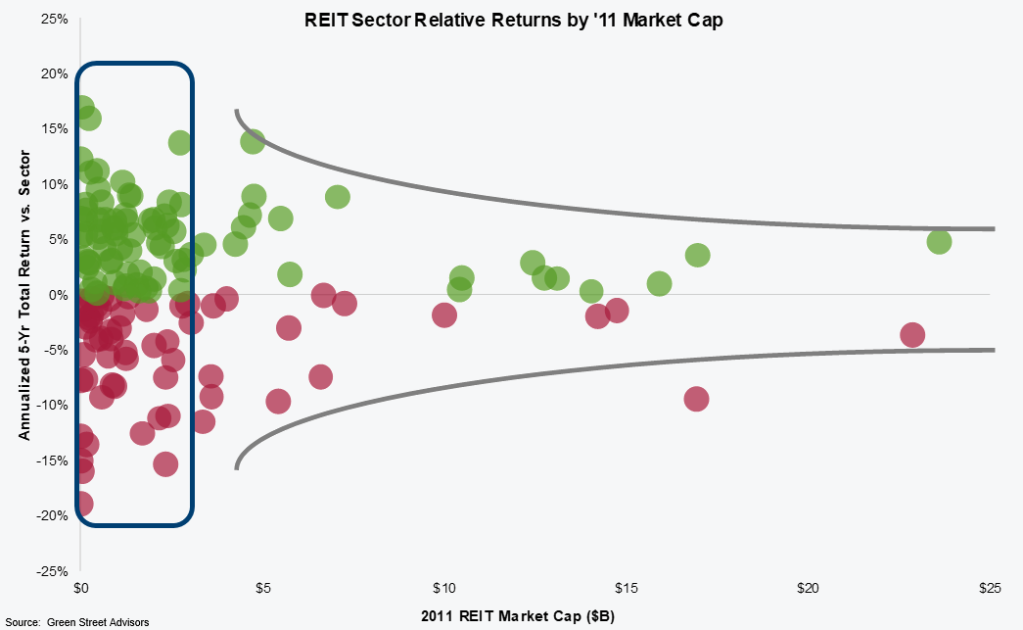 There are a few key principles that tend to differentiate the outperformers from the underperformers among smaller REITs – franchise value, balance sheet management, corporate governance, and overhead.

Positive franchise value, or the ability for a management team to add or detract value over time, can be reflected in the company’s performance track record. An important component of franchise value in the REIT space is management’s capital allocation acumen in terms of listening to signals from the market to grow or shrink their portfolio.

Balance sheet management is also critical and needs to be a consideration beyond simply ensuring survival in a downturn. “Working to achieve an optimal capital structure as quickly as possible should be top-of-mind for each REIT management team,” Owens emphasizes. Unfortunately, balance sheet considerations tend to fall to second place after growth initiatives in the minds of many management teams. REITs that operate with lower leverage generally outperform those with more leverage. Over the last five years where the market was in an expansionary cycle, low-leverage REITs have outperformed higher-leverage REITs. Smaller REITs that operate with strained balance sheets often trade at discounts to their more appropriately levered peers, and that limits their ability to play offense during periods of market dislocation.

Nobody Should Fail the Take-Home Test

It is not uncommon for larger REITs to operate with a G&A load of 30 to 40 basis points as a percentage of asset value, while smaller REITs often operate at two to three times that. The overhead challenge for smaller REITs is often exacerbated when their shares are trading at a discount to asset value and therefore their cost of capital signal from the market is to shrink the company. As a smaller REIT, shrinking not only further exacerbates the company’s overhead burden, but it also reduces the public float and may increase leverage. Entering joint ventures and strengthening investor messaging can be effective strategies to consider when seeking capital for growth while working to reduce net asset value (NAV) discounts. Higher-than-average G&A without a convincing story behind it can have a materially negative impact on value. Excess G&A that exists to support growth or compelling value-creating initiatives can be attractive, however.

Institutional investors don’t always pay attention to smaller companies, but they don’t completely ignore them either. Green Street's analysis shows that the top 30 active U.S. REIT investors have made sizable bets on small and mid-sized REITs. 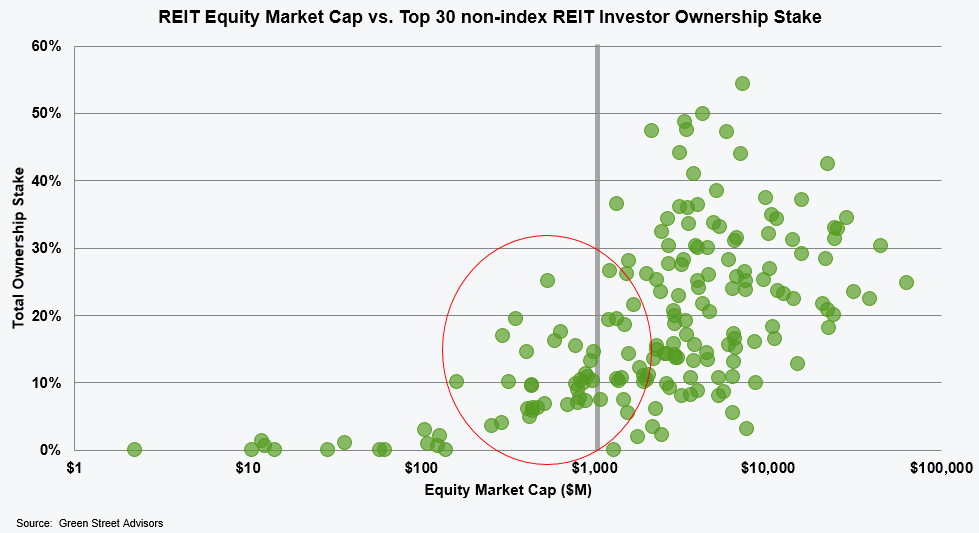 The time is particularly ripe for unique, well-positioned companies to attract capital, as many institutional investors are seeking opportunities outside their traditional comfort zones. These investors are starting to look more at smaller REITs, smaller operating companies, secondary markets, and companies in real estate sectors poised to benefit from technological advancement. Some smaller players have taken proactive steps to attract large investors, giving them access to ample capital to thrive, but the majority still have work to do.