Office: The Long Shadow of Covid

Most commercial property sectors have put Covid-19 largely in their rearview mirrors. Some have flourished during the pandemic, others have rebounded, or will soon, to pre-pandemic valuations and revenue streams. Office is an exception, and in the United States and Europe, it remains at the center of the debate over the impact of the virus on long-term prospects for commercial real estate.

It is abundantly clear that many employers are adopting a hybrid approach – some time in the office and some time working from home – to reopening workplaces. But those work from home (WFH) plans are far from uniform, and how they ultimately play out will be critical in determining demand for office space in the future. That question was a key focus of a recent Green Street webinar on the office sector.

“Green Street has been aggregating a variety of employee surveys to get a sense of what is likely to be the predominant hybrid workforce model, and the data is demonstrating a pretty clear preference for more flexibility going forward,” said Daniel Ismail, senior U.S. office analyst. “Before Covid, the average employee was spending 4½ days per week in the office. It’s now trending more toward 3 days per week.”

Change in Days WFH Based  on Survey Data

Granted, the surveys are employee-focused, and employers may not fully embrace the desire for a permanent, dramatic increase in remote work. But Green Street believes the confluence of a war for talent and cost savings from a reduction in required office space will persuade employers to embrace a more permissive hybrid model.

Watch the replay of our latest webinar Global Office: Navigating a Hybrid World

“Amazon is a good example of an interesting pivot toward more flexibility,” Ismail said. “Earlier this year, there was a statement by the firm maintaining their commitment to an in-office culture, reiterating the centricity of office in their workplace strategy. But a few weeks ago, we saw a pivot to allowing more flexibility for their employees. It wasn’t explicit, but it does seem that when nearly every other employer is offering some sort of flexibility, to compete for talent, it’s more likely than not that you’ll see more firms continue to pivot in that direction.”

A similar trend is underway in Europe.

“UBS has actually said that they would use a flexible working approach as an advantage when competing for employees with Wall Street investment banks,” said Marie Dormeuil, Green Street’s Pan-European office analyst. “That was a direct answer to Morgan Stanley’s famous quote that if you can go to a restaurant in New York City, you can come into the office. They are engaged in a race to attract talent in the future.”

As a result, Green Street forecasts a 15% reduction in demand for office space in the United States, the mid-point of a potentially wide range of outcomes that were set in motion well before the global pandemic accelerated WFH in early 2020. As the following charts show, WFH has had minimal impact on some Continental European office markets, but it has been a significant headwind in the U.S. and U.K. 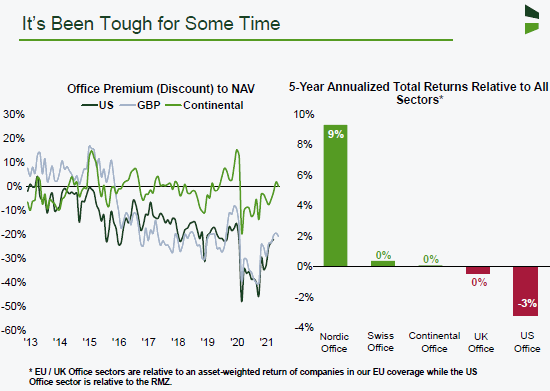 Commercial property investors would be wise to take notice of variances within office markets, particularly in the United States. Watch the following video clip as Daniel Ismail explains a chart visualizing Green Street’s analysis of which office markets stand to do best in a post-Covid world.

Contact us for more information about our proprietary market grades and forecast rankings.

Also of importance to property investors is a growing focus on ESG (Environmental, Social and Governance) issues. Green Street for years has conducted extensive analyses of the “G.” Now the “E” is moving to the forefront of our focus. The next chart shows the percentage of greenhouse gas (GHG) emissions covered by government regulations. It is still small in both the United States and Europe, with enacted U.S. laws lagging those in Europe. But in both regions, the trend is toward more regulation of GHG. 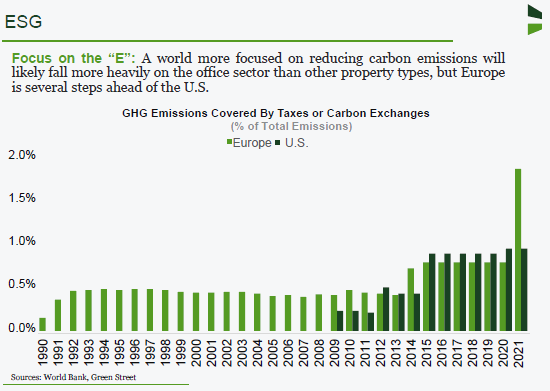 Starting in 2024, office landlords in New York City will be penalized if their buildings exceed carbon emissions limits. Other cities and states are expected to adopt similar legislation. What this means for investors is that there will be a divergence in financial performance between office buildings that can meet the new ESG standards and those that cannot. Even before the pandemic, Class A buildings, which are either newer or renovated, outperformed their lower-quality counterparts by several hundred basis points as measured by net absorption of available office space. The pressure to conform to ESG requirements will only increase the pressure to upgrade on owners of lower-quality buildings, with an outsized negative impact on value and operating results if capital isn’t spent.

With those factors in mind, Green Street forecasts continued weakness for the office market in much of Europe, and even more so in the United States, where we estimate private market values are down about 8% compared with pre-Covid 2019.

Confidence in any forecast of office sector performance is limited by a lack of data because of the frozen (though slightly thawing) leasing market, it’s difficult to imagine rent and occupancy returning quickly to pre-covid levels anytime soon.

Class A and Sun Belt properties will continue to outperform the rest of the sector, but after a dismal stretch in ‘20 and ’21, we anticipate office NOI growth will struggle to beat inflation over the next five years.

At the conclusion of our Global Office Webinar, Green Street’s newly appointed Director of Research Cedrik Lachance asked Ismail when he believes average occupancy will return to 2019 levels. His answer:

“Never. That’s a bit tongue-in-cheek, but I do think that structural vacancy in the United States has risen several hundred basis points. To put it simply, if remote work causes a reduction in office demand, and if the U.S. supply growth continues at about 1% per annum, unless you have a mass conversion of office space, or demolish office space over the next few years, you’re going to get elevated vacancies across the U.S.”