Amid the downturn sparked by the pandemic last year, nonperforming loans made up 0.86% of the commercial mortgages on the balance sheets of the 325 largest U.S. banks at yearend, up from 0.41% a year earlier, according to regulatory data compiled by Trepp Bank Navigator. The figure has remained below 1% since 2015 and is a fraction of the all-time peak of 8.6% hit in 2010.

The low levels of bad debt are due in part to a host of forbearance measures implemented to assuage the effects of shutdowns enacted to curb the virus’ spread. As those accommodations expire, however, the level of troubled debt is expected to tick higher, stoking optimism that more distressed opportunities could shake loose down the road. 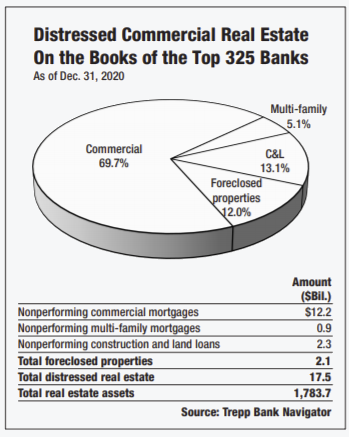 All told, the top banks have just $15.4 billion of nonperforming loans on their books. There is another $2.1 billion of foreclosed properties, but 20% of that total belongs to just one regional bank in Texas focused on distressed loans.

Meanwhile, hundreds of billions of dollars have been raised for opportunistic and distressed investing — drastically skewing the supply-demand curve and helping support property values.

“It won’t be the tsunami we were all expecting last March and April,” said James Jordan, principal and portfolio manager at Taconic Capital of New York. “You will see a decent distressed opportunity, but it won’t be like the [global financial crisis] because of all the capital flooding into the system.”

Market participants pointed to several factors they say have helped banks maintain stronger balance sheets than in past crises. First, in the wake of the Great Recession, banks wrote lower-leverage loans and held higher reserves that left them better positioned to absorb the shock of future dislocations.

Further, between the Federal Reserve and Congress, the U.S. government has flooded the market with liquidity and encouraged forbearances, extensions and other modifications that allowed banks to avoid classifying as many loans as nonperforming.

“The reason banks have been less aggressive than they were a decade ago is that everyone learned the ‘pretend and extend’ game to avoid being a forced seller into an illiquid market,” Jordan said.

Finally, the strong economy is propping up property values. Stock indexes are at or near all-time highs, and unemployment levels continue to fall.

“Regulators have done an incredible job of maintaining liquidity in the system and not allowing short-term volatility to destroy value,” he said. “Are prices down? A little bit, but not so much, generally speaking, that it’s putting pressure on the underlying debt.”

Davis, who has invested in multiple economic downturns, said the government’s work to keep liquidity in the market has been a win for banks and borrowers.

“It keeps the market orderly,” he added. “If lenders and equity investors believe there’s going to be liquidity for their assets under almost any circumstances, they’re going to be willing to invest and lend with less of a risk premium.”

Matt Anderson, a managing director with Trepp, said one clue as to how banks already have positioned themselves to avoid selling off loans at large discounts is their risk reserves.

Bank of America, Citigroup, J.P. Morgan and Wells Fargo set aside a combined $33.3 billion of fresh capital to cover potential loan losses in the second quarter of 2020, according to a Trepp analysis. In first-quarter 2021 earnings reports, the banks reported that they had negative $9.1 billion in loss provisions — meaning they had clawed back some of the money set aside last year for losses, instead counting it toward net income.

“Although the Covid-related disruption to the economy is not yet over, the recalibration of loss expectations is a clear signal that the banks think their current loss reserves should be sufficient to handle future charge-offs of bad loans,” Trepp said in an April 20 blog post.

Get a demo of Portfolio Tools, Green Street’s new suite of custom analytics for commercial property and loan portfolios

Anderson called that a “double win” for the banks. “There’s plenty of capital available to snap up any distressed properties, and with the economy in a growth mode right now, the pricing on those distressed assets is going to be pretty advantageous for the sellers.”

Davis agreed that ultimately investors will pay up for distressed deals, which will lower returns. “The fact of the matter is, if it has the word ‘distress’ on it, it’s being bid up,” he said.

More distressed debt may yet emerge. In fact, as forbearances end, moratoriums on foreclosures run out and banks reclassify loans as nonperforming, vulture investors are hopeful they’ll find pockets of opportunity.

“The one question that’s got to be on everybody’s mind is what happens when the Fed turns the screws down on forbearance,” Davis said. “How is the market going to change? ... When that holiday on classification goes away, that has the prospect of being a game changer.”

Learn about Atlas, Green Street’s interactive mapping platform with a newly expanded database of 500,000+ verified CRE transactions from $5M & up

While struggling retail and hotel properties are behind much of today’s distressed debt, Taconic’s Jordan believes that the future of office work also will play into how much opportunity emerges. Over the next few years, distress will start to become clear as waves of new leases are signed at materially lower rents, thereby lowering asset valuations.

“The office side is extremely nuanced and idiosyncratic,” Jordan said. “It’s asset-, market-and even company-specific in the decisions that will be made there.”

Wells, which has the largest commercial real estate portfolio of any U.S. bank, continued to hold the most distressed debt at yearend. It had $1.53 billion of nonperforming loans on its books, up from $544 million a year earlier.

For foreclosed properties, Beal Financial of Plano, Texas, had the most bank-owned real estate at $429.5 million, an enormous increase from just $2.6 million in 2019. Beal focuses on distressed debt, and its strategy is to acquire problem loans and work them out.

With $103 million of bank-owned real estate, Wells was the only bank that also had more than $100 million in foreclosed properties.

The Trepp Bank Navigator data is based on reporting by U.S. banks, including those that have foreign ownership, but excludes the holdings of foreign banks’ U.S. branches and agencies, which are reported separately.

Green Street’s News products consist of highly regarded publications and related databases that deliver exclusive news and data on the commercial real estate and finance markets. These insights are not available elsewhere and are religiously relied on by senior executives at the largest and most active firms in the industry. Real Estate Alert is widely recognized as an early warning system for buyers and sellers of major U.S. CRE properties. Craving more similar insights? Subscribe online now to access Real Estate Alert every week.