Co-working: Good or Bad for Office?

Green Street published a special report explaining how the co-working trend, popularized by growing businesses like WeWork, could eat into office demand. The proliferation of co-working spaces brings headwinds and tailwinds to the office sector; however, the study’s base case estimates a cumulative 2-3% reduction in demand by 2030.

Co-working, or providing communal, flexible office space on a short-term basis, is exploding, and it has the potential to cause problems for office landlords. The best-known provider, WeWork, has grown from a single office location in New York in 2010 to over 160 locations (with 60 more in the pipeline) and a $20 billion valuation. Regus, one of WeWork’s top competitors, has been in the business for decades and operates over 3,000 co-working locations globally.

The growth of the co-working industry has been impressive, and some landlords have become more receptive to the model in small doses. But, many industry participants question whether the model can withstand an economic downturn, especially since the initial phases of growth have relied on freelancers and entrepreneurs. There is significant growth potential for office demand from further tapping into these “independents,” but the ride may be bumpy along the way.

Green Street’s recent study on co-working suggests the trend could be modestly negative for the office business. The net impact on office demand boils down to whether the continued aggregation of the independent workforce spurs more demand than what gets lost as large corporate users switch from “traditional” offices to highly dense co-working or flexible office space. Green Street’s base case estimates a cumulative 2-3% demand reduction by 2030, with possible dilutive implications for lease economics and values as well. 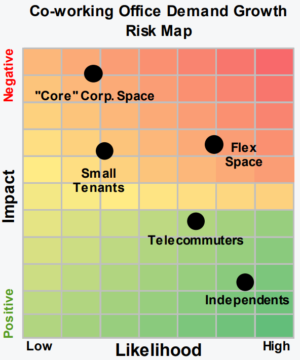 Co-working was initially driven by the preferences of millennials and the rise of the independent worker. In this ramp-up phase, co-working targeted the independent entrepreneurs, freelancers, and small start-ups. “Folks that previously were working in a coffee shop or their living rooms have been brought into office buildings,” said Jed Reagan, lead analyst for Green Street’s office sector coverage. That additional appetite for space has been a boon to many office landlords.

More recently, co-working companies have targeted larger corporate customers as a new path of growth. Corporations may “outsource” larger pieces of their core headquarters and regional offices to co-working operators, thereby reducing their footprint. As an example, a company may prefer to use WeWork instead of signing a new lease when it expands to new locations. In addition, WeWork recently introduced Onsite Solutions, which offers flexible office space arrangements for companies that want to provide employees with hipper environments than traditional workplaces.

Reagan says such initiatives have the potential to hurt office landlords because co-working facilities typically require less space - about 75 square feet per worker compared with roughly 175 square feet in traditional offices. Also, co-working leases for big tenants tend to be six months to five years, much shorter than the typical lease term of five to 15 years. The net effect, according to Reagan, is to “undermine the stability and security of cash flow for landlords and create more churn among tenants as the shared working space approach spreads from small businesses to large ones.”

There are many drivers that could influence the growth of co-working, and that creates a wide range of effects on net demand. Green Street's new research provides a sensitivity analysis that compares the density of co-working (in terms of square feet per worker) and the cumulative impact on office demand through 2030, with lower bound, base case, and upper bound estimates based on corporate flex demand and the penetration of independents. Learn how to get the full report.

Trending Across the Atlantic

Recent analysis from Green Street's European research arm examines co-working economics in London and Europe. Worldwide, the team estimates there will be as many as 14,000 global co-working locations by the end of this year. London is the furthest along the growth curve in Europe, with over 20 WeWork locations. However, co-working operators are making fast inroads into secondary markets in Europe, as well as in cities across other continents.

Peter Papadakos, Managing Director in London, found that flexible office space was cash-flow positive once occupancy hit 75%, and that most co-working providers were able to achieve 90% occupancy within a year. Break-even occupancy is closer to 60% in the highest-rent markets such as London, where co-working operators can garner larger rent spreads. In terms of EBITDAR margins, co-working spaces can generate more than 1.5x the yield of a traditional office lease. However, the study found property buyers required higher cap rates for offices run purely as co-working or flexible workspace, compared to those of traditionally leased offices, offsetting the EBITDAR advantage.

Green Street analysts have created broad and thoughtful long-term market-level growth rates, which are used to produce IRRs for valuing properties and portfolios by market and sector. In the office space, the rise of co-working could eventually influence those long-term growth rates, with distinct impacts depending on location. U.S. gateway markets have been the early adopters, led by New York City, where WeWork alone leases more than 3 million square feet. (more than 1% of space) across 44 locations and is now among the city’s largest office tenants. Seattle has five WeWork locations, primarily in the South Lake Union and downtown areas of the city. Last year, Airbnb set up shop at a WeWork location in Seattle before leasing a permanent engineering office in town. Amazon has been a busy early corporate adopter of co-working space. 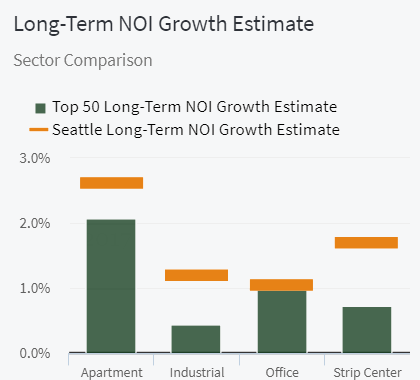 All-in-all, more significant traction for co-working among corporate tenants could be bad for landlords. A modestly negative impact on office demand and values seems a fair betting line today. Learn more about Green Street’s property insights and submarket analytics with five-year forecasts for the top 50 markets.