The investable commercial property universe has been greatly transformed over the last few decades. Whereas, core sectors – apartments, industrial, office, and retail – used to comprise the vast majority of even the listed property market, newer property types, such as self storage, health care, data centers, etc. now play a much bigger role. As a result, non-core property types now comprise over half of the broadest index of equity REITs.

This evolution has been a case of survival of the fittest, as today’s prominent non-core sectors have, almost without exception, delivered excellent long-term returns accompanied by relatively modest risk. Institutional investors in the private market have taken note, and exposure to these sectors has increased over the years.

Despite that, the most widely used gauges of commercial property price appreciation and return performance focus almost exclusively on core sectors. It’s as if S&P never bothered to include relatively new companies, like Alphabet, Amazon, and Facebook, in its index of the 500 most important companies.

To fill that void, we are pleased to introduce an improved Commercial Property Price Index that incorporates fifteen sectors, as well as a new total return index that does the same. Benchmarks built for the modern age serve as a better gauge of what is happening in real estate markets and they provide a more appropriate means of measuring the relative performance of any property portfolio.

The birth of the REIT industry as we know it today occurred during a three-year window that commenced with Kimco’s 1991 IPO. 94 equity REITs came through that window via IPOs, and Green Street, with a staff that grew from two to six over the period, managed to publish reviews on 57 of them. Evaluating that many property portfolios and management teams in such a short span resulted in a lot of blurred memories, but one meeting that stands out to this day involved Sam Zell’s pitch for the company now known as Equity Lifestyle Communities (ELS). He made the case that manufactured housing communities were the best real estate investment he had ever encountered, because they offered decent initial yields, low cap-ex, large barriers on supply, good demographics, and high turnover costs borne by the tenant. Seldom has a pitch borne such fruit, as ELS subsequently delivered annualized total returns of 16% in just over 25 years as a public company. That means that $23,000 invested in the IPO is now worth $1 million.

That performance beats the vast majority of other listed investments from that era, as general equities delivered 10%. Surprisingly, however, it trailed that of one other REIT – Public Storage (17% return) – that also happened to operate in a sector that was largely unfamiliar to the REIT investors of the early ‘90s. A disproportionate number of other top performers faced similar identity crises, but blue-chip REITs in the health care, net lease, and factory outlet sectors all went on to deliver above-average 25-year returns. Not every new idea from that era worked, nor did every company in those sectors perform as well, but a clear lesson emerged: it’s wise to stay open minded about what constitutes “real estate.”

REITs in other “non-core” sectors, including owners of data centers, student housing, cell towers, and single-family rentals have subsequently joined the party. Performance has ranged from good to great, as each of these sectors that has been in existence for at least ten years has delivered returns that beat the average generated by “core” sectors (apartments, industrial, office & retail). Just as impressively, these high returns in non-core sectors have been accompanied by lower risk, as average betas (vs. other REITs) have been below the core-sector average. These successes have set the stage for impressive growth, and non-core sectors now comprise over half of Nareit’s All Equity REIT index.

That is a big change from the era in which the REIT sector was born – core property types comprised 80% of the REIT index back then. This shift makes ample sense when viewed against the backdrop of generational changes in the makeup of the U.S. economy. Some of the newer additions, such as health care and student housing, have benefited from favorable demographics and/or innovations in living options, while others, such as cell towers and data centers, play integral roles in a technology sector that has enjoyed enormous growth. Meanwhile, some core sectors, such as office and retail, are confronting secular demand challenges that will likely continue to cause them to command a smaller share of the pie. The ever-growing importance of non-core real estate in the listed market has been a simple case of survival of the fittest, and there is no reason to think the evolution will stop anytime soon.

Curiously, however, this remarkable transformation of the real estate landscape in the listed market has been met with indifference among many members of the institutional real estate investment community. Perhaps nowhere is this more apparent than in the performance metrics they employ, as total return benchmarks, such as NCREIF’s NPI or ODCE gauges or the PREA/IPD Property Fund Index, focus almost exclusively on core property sectors. The same can be said about well-known gauges of property price appreciation. It’s as if modern-day mutual fund managers were benchmarked to an S&P 500 dominated by GE, GM, IBM, Walmart, and Exxon, with no weighting accorded to Amazon, Apple, Alphabet, or Facebook.

This is not to say that institutional real estate investors haven’t taken note of the newer, non-core sectors, because they have. Fund managers offering value-add or opportunistic strategies have had tremendous success in raising capital in recent years, and a significant portion of this capital is finding a home outside of the major food groups. To be sure, most of the dollars put to work by the likes of Blackstone, Brookfield, and Starwood have been focused on core sectors, but self storage, health care, single-family rental, manufactured housing, data centers, and other non-core sectors have gained prominence. Many smaller, more specialized managers operating in these sectors are also prospering.

To better meet the needs of today’s evolved commercial property landscape, we’re pleased to introduce a new, improved, and expanded suite of Commercial Property Price Indexes. The most significant change acknowledges the reality that gauges of property performance/appreciation focused solely on core sectors are increasingly irrelevant and outdated. As a result, our primary CPPI will henceforth capture price changes in fifteen property sectors. Sector weightings will be closer to those found in the public sector, which means that the weighting on core sectors will drop from 100% to just over 60%. The largest weightings accorded to non-core sectors are 15% for health care and 7.5% for lodging. Individualized CPPIs are available for each sector, as is a Core Sector CPPI focused solely on apartments, industrial, office, and retail.

As has always been the case, the Green Street CPPI is based on our estimate of price appreciation of the property portfolios owned by the REITs in our 81-company U.S. coverage universe. It is driven by the NAV models maintained by our 37-person U.S. research team, which, in turn, are driven primarily by changes in market cap rates and NOI growth prospects. Differentiating positive attributes of this index include its timeliness (it beats others to inflection points by several months), its flexibility to employ expert judgement calls during times when transactions dry up, and its inclusion of property types where performance data beyond that generated by listed REITs is virtually non-existent. Its largest drawbacks relative to other indexes include a lack of precise and objective inputs (our analysts are clearly experts when it comes to ascribing cap rates, but the process is nevertheless inherently subjective) and squishiness when used as a gauge of long-term appreciation (reported same-store NOI growth figures on which it is based are not uniformly calculated, which is a problem only when any errors are compounded over many periods). The guiding principle underlying our CPPI is best captured by Warren Buffett: “It’s better to be approximately right than precisely wrong.”

Benchmarks for the Modern Age

In addition, we are introducing a new suite of total return indexes, the flagship of which is the Green Street Commercial Property Return Index (CPRI). As is the case with our CPPI, the CPRI captures returns across fifteen property types. The logic underlying its computation is similar to that of the price index, with the primary additional input (beyond including income) being a deduction for the cap-ex necessary to generate the reported same-store NOI growth. The appropriate level of cap-ex reserves has been the topic of innumerable in-depth reports from our shop over the last couple of decades, and while precision here is not possible, the inputs are as thoughtful as can be found. For most intents and purposes, the CPRI shares the same strengths and shortcomings outlined above for the CPPI.

A more timely, and tougher to beat, total return benchmark 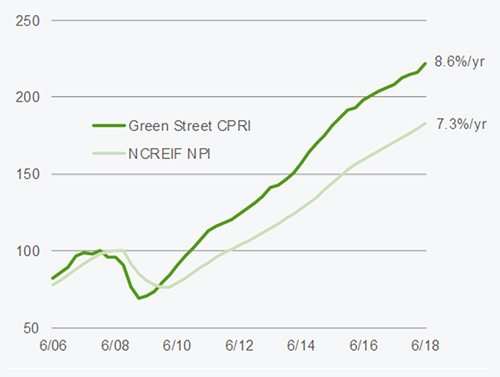 This new return index provides a more useful performance benchmark for real estate investors who have moved on from investing solely in the four core property sectors. That describes the lion’s share of the institutional investor universe, and the existence of return indexes for the spectrum of individual property types means that customized indexes can be compiled to fit the profile of any portfolio. Today’s real estate portfolios require modern benchmarks, and the goal of our suite of appreciation and return gauges is to provide exactly that.