As stock-picking has become more difficult over time, the opportunity to generate alpha through sector selection has grown larger. Green Street’s Sector Allocation framework identifies the sectors that offer superior long-term risk-adjusted returns and has delivered impressive results for the past five-and-a-half years. Continue reading for insights from “That’s Where the Money Is,” a Heard on the Beach series report.

Active US REIT portfolio managers have had life pretty good since REITs came of age in the early ’90s. Sizable qualitative differences in companies have presented an opportunity for informed investors to reliably segregate winners from losers, and positive alpha has been common.

The sector’s evolution has altered the landscape. Stock-picking has become more difficult, as survival of the fittest has rendered a more homogenous (and better) menu of companies. It is still possible to create alpha in this manner, but not as much as used to be the case. Meanwhile, an opportunity on another front – sector selection – has become larger. The number of investable property sectors has nearly doubled, and non-core sectors now comprise more than half the market. The market’s understanding of these new sectors is sketchy at best.

Many attempts to take advantage of the sector-picking opportunity are overly simplistic and unlikely to succeed. Green Street’s framework, deeply rooted in fundamentals, attempts to avoid these mistakes, and its track record has now seasoned to the point where it can be evaluated.

When measured over trailing-12-month periods, “Buy”-rated sectors have bested “Sells” by an average of 3.4%, with a positive spread nearly three-quarters of the time. Those are impressive results, though not as large or consistent as those generated by our stock recommendations. Results in the private market have been even better, both in magnitude and consistency.

That’s Where the Money Is: Seldom has more common sense been conveyed in fewer words than Willie Sutton’s explanation for robbing banks.1 But the wisdom of bank robbers is more complex than the simple answer would imply, as they universally steer clear of the biggest pots of money. Knockoffs on defenseless suburban bank branches are a dime a dozen, yet the $290 billion gold stash in the vault at the NY Fed has been safe and sound for decades. The size of the prize certainly matters to bank robbers, but their behavior shows that the ease of obtaining it is the more important factor.

Investors are confronted with similar choices. The biggest bucks are available to those possessing correct answers to the broadest macro questions. What will the yield curve look like in six months? Will we be in a recession? How will the 2020 election play out? The answers will have an enormous impact on investment performance and, as a result, the topics garner a great deal of attention by the media and investment professionals alike.

For the most part, this is little more than a parlor game, as informational advantages on questions this large are impossible to obtain. Betting odds on bigpicture topics are continuously reset with ruthless efficiency in the marketplace and attempts to best them are almost certainly futile.

Stock picking rests at the other end of the spectrum, as potential rewards are smaller, yet presumably easier to achieve. Capturing them consistently has proven to be no easy task for the active management community as a whole, but it is nevertheless reasonable to posit that investors with the most resources/skill can gain informational advantages in at least some instances. When true, they will possess better-than-average estimates of fair value and should outperform the market.

Substantial evidence exists that the REIT arena offers such an opportunity. A number of the largest active managers in the space have delivered index-beating returns over long time periods, and the return differential between our US Buy and Sell portfolios over the last twenty-five years exceeds 20%/yr!2 This track record is a good case study in stock picking, as the discipline imposed by our sector-neutral approach means it has been generated exclusively by identifying the cheap/expensive stocks within each sector.

The evolution of the US REIT industry has altered the opportunity set for REIT investors. On the one hand, alpha-generating opportunities via stock selection have shrunk, as investors have become increasingly sophisticated, and REITs within each of the property sectors employ more homogenous business models than used to be the case. Schumpeter’s creative destruction has been on display, as winning corporate strategies, such as the use of low leverage, are now de rigueur, while many flawed business models and weak management teams have gone away. As a result, most active managers have had a tougher time of it during this decade than was previously the case. Our own track record shows that superior stock selection can still pay off handsomely, but the harvest is no longer as bountiful as it used to be. 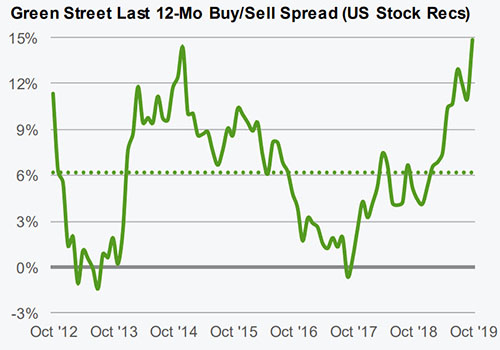 As US REITs have become less diverse within each property sector, the number of property sectors to choose from has roughly doubled. Whereas core property sectors (apartments, industrial, office, and retail) used to comprise the lion’s share (80%) of the investable REIT universe, they now constitute a distinct minority (38%). There are now at least fifteen readily accessible property sectors.

The proliferation of these new options should, in theory, open the door for REIT portfolio managers to create alpha via superior sector selection. Indeed, the potential alpha (top-third performers minus bottom-third performers) associated with perfect sector selection is now larger than what can be derived via perfect intra-sector stock picking.

There’s a catch, however, as sector selection is analogous to robbing the downtown bank branch with security guards on hand – it’s no easy task. That’s because relative sector performance is heavily impacted by the performance of the economy and the direction of interest rates. Since appropriate betting lines on those variables are efficiently factored into sector valuations, it is impossible to place sector bets that are immune to the big swings they can cause.

But the endeavor can still be fruitful. Despite all the macro noise in sector performance, differences between fair and prevailing values still matter. The sector allocation framework we introduced five-and-a-half years ago identifies those differences by assessing the best/worst risk-adjusted return profiles in both private and public markets. Those return expectations are a function of some inputs that are well understood by the marketplace (cap rate and intermediate growth) as well as some that are not (cap-ex and long-term growth). The expansion of newer, poorly understood, sectors enhances the likelihood that mis-pricing can be identified via a thoughtful fundamental approach such as this.

Two Paths to Alpha: Stock picking garners the lion's share of the attention from most active REIT investors, but superior sector allocation offers at least as much potential alpha. Sector performance is profoundly impacted by factors, such as changes to the economic outlook and interest rates, where it may be impossible to consistently outsmart the market. Rather than focus on those, our sector allocation framework identifies sectors that offer superior long-term risk-adjusted returns.

Helpful Insight: Since our current Sector Allocation framework was introduced five-and-a-half years ago, the tool has done an excellent job of identifying the sectors in the private market that have subsequently enjoyed the best/worst price appreciation. Despite a rocky patch during '16/'17, the tool has also worked far more often than not in the public market.

The passage of time affords the ability to assess whether this framework, which appears in the Real Estate Securities Monthly, has added value. The answer is a definitive “Yes!” The results are particularly impressive in the private market, as the return spread measured over a twelve-month period between sector “Buys” (i.e., the top third) and “Sells” (bottom third) has always been positive, and it has averaged about 500 bps. Private investors employing this approach should find sector picking to be a lucrative endeavor.

As expected, the task is more difficult in the public market, but results have nevertheless been positive nearly three-quarters of the time. Though a comparison is imperfect due to methodological differences, the average spread of 340 bps has been about half as large as the spread on our stock selections over this period.

Sector performance is also impacted by changes to the sector-level fundamental outlooks. The most notable example in the last five years is the dramatic ecommerce-induced shift in fortunes of industrial and retail properties. Our systematic approach toward sector allocation is unlikely to identify themes such as this, and that was the case in this instance. Though that miss is hardly something to brag about, the fact that good returns have been generated despite being weighed down by this trade is encouraging for future results. It’s a bit like missing the boat on hard-to-foresee M&A activity, yet still generating a good stock-picking track record.

This is not to say that we don’t try to make bets of this sort. We do that outside of this framework, albeit on an infrequent basis. Those calls are made when we have conviction that our near-to-intermediate growth outlook is better (or worse) than the outlook baked into pricing. The five calls that have seasoned/closed over the last five years have generally been open for a period of six-to-twelve months with an average annualized outperformance of 1350 bps. Each of them has worked, although a new underweight call on malls is behind by a run in the first inning. Common approaches toward sector selection often rest on macro views or overly simplistic bets on sectors with good growth. Those approaches should not be expected to work on a consistent basis, but it is good to know that a disciplined, methodical approach can capture at least some of the large potential alpha that a diverse property market now affords.

¹It is doubtful that Willie actually ever said this, but it’s more fun to think he did.
²Buys +22% vs. Sells +1%. Past performance is no guarantee of future performance.

As stock-picking has become more difficult over time, the opportunity to generate alpha through sector selection has grown larger. Green Street’s Sector Allocation framework identifies the sectors that offer superior long-term risk-adjusted returns and has delivered impressive results for the past five-and-a-half years. Continue reading for insights from “That’s Where the Money Is,” a Heard on the Beach series report.