Deurbanization: A Tale of Three Cities

During a recent Green Street exclusive client event focused on the impact of remote work on global urbanization trends, participants were asked what percentage of urban workers they believe will go to an office daily in 2025. The consensus was that about 70% will still commute to an office every day. Green Street takes pride in our independence and unbiased approach, which can lead to forecasts that differ sharply from broader market views. True to form, we believe that about 70% of office workers will work remotely at least part-time within the next five to ten years. That should reduce demand for office space by about 15% and accelerate an ongoing deurbanization trend as workers untethered from a daily commute seek less-congested, less-expensive, and more-desirable living situations.

“We do expect the majority of workers to adopt a hybrid approach through which they’ll work from home one to four days per week,” said Green Street’s Dave Bragg.  “This allows for incremental suburbanization because working from home requires larger dwellings, and the commute in from the suburbs is more tolerable when done less often.”

But that shift and its impact will by no means be monolithic across commercial real estate markets. The future is likely to look much different for property investors in places such as San Francisco, Charlotte, and London.

U.S. Gateways – I Left My Heart in San Francisco

San Francisco, New York, and other large gateway cities in the United States are likely to feel the biggest impact of post-pandemic deurbanization. There is even a very slight but real chance that a gateway market could suffer a similar fate as Detroit, which has lost two-thirds of its residents and inflation-adjusted assessed property value over the past 70 years, as we wrote recently in Heard on the Beach: Herd Community.

“The two places hit hardest over the past year, New York City and the San Francisco Bay Area, are the most likely suspects. They share low WFH utilization rates, poor fiscal health, and progressive politics. It is unlikely that their future will rhyme with Detroit’s past, but parallels are found.”

“An outmigration from New York City and the Bay Area would merely represent a continuation of the pre-Covid trend. The cities’ 2019 population growth rates were their lowest of the last decade and negative in absolute terms. The same can be said for Chicago and Los Angeles. A lesson from Detroit…is that negative demand is highly problematic for property values.”

Declining population in gateway cities would not necessarily translate into a one-for-one benefit for nearby suburbs or the Sun Belt, meaning that deurbanization is probably a net negative for real estate values overall. But there are still bright spots, even in battered sectors such as office, that are easy to spot using Atlas, Green Street’s mapping platform. Atlas houses our proprietary grades at the market, submarket, and zip code levels across various property sectors. Grades are meant to represent long-term rent growth potential and are based on a wide range of factors including supply and demand, quality of life and fiscal health. One example is downtown Charlotte, N.C., which ranks among the top 5% of all U.S. office submarkets in the Atlas tool. 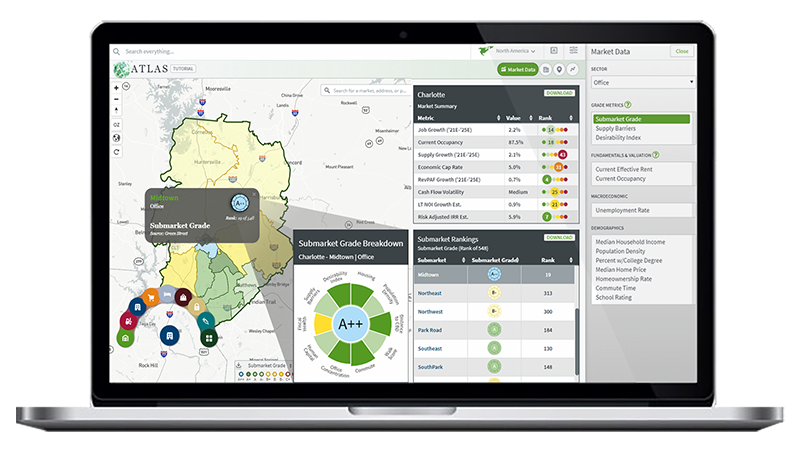 Get a demo of Atlas

“The opportunity to leave big cities for the neighboring suburbs or other states is appealing for many households and businesses in part because of the high cost associated with living and doing business in those places. Taxes are a big component of that cost. In the past we have observed a tight link between taxes and migration,” Bragg said. There is also a tight link between the health of a city’s financial structure and its commercial property market.

Public and private market property investors often reach different answers on big questions, but they are roughly aligned on the extent to which the outlook for Sun Belt versus gateway markets has changed over the past year because of the Covid pandemic. The Sun Belt has been repriced favorably on a relative basis by an order of magnitude in the high single-digit range for apartments and mid-single digits for office. However, our changes to market-level underwriting suggest a greater warranted bifurcation. 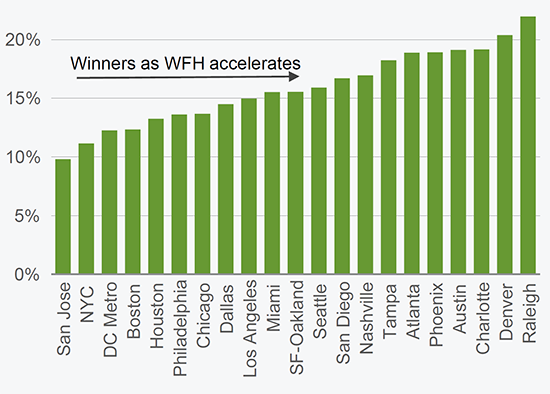 In Europe, language, cultural and political differences present significant barriers to moving from one country to another. As a result, Green Street forecasts that for most of Europe, there will not be a broad deurbanization movement. People and businesses will continue to gravitate toward capital cities, which generally serve as the cultural, economic, and political center of each country, except for London.

“London is almost its own little universe within the whole of Europe. The forecast for the days working in the office and the change post-Covid generally in line with the thinking in the U.S.,” said Peter Papadakos, Green Street’s Head of European Research. “But for the rest of Europe we actually believe that something less dramatic is going to happen.”

Avg. Number of Days Per Week in the Physical Office 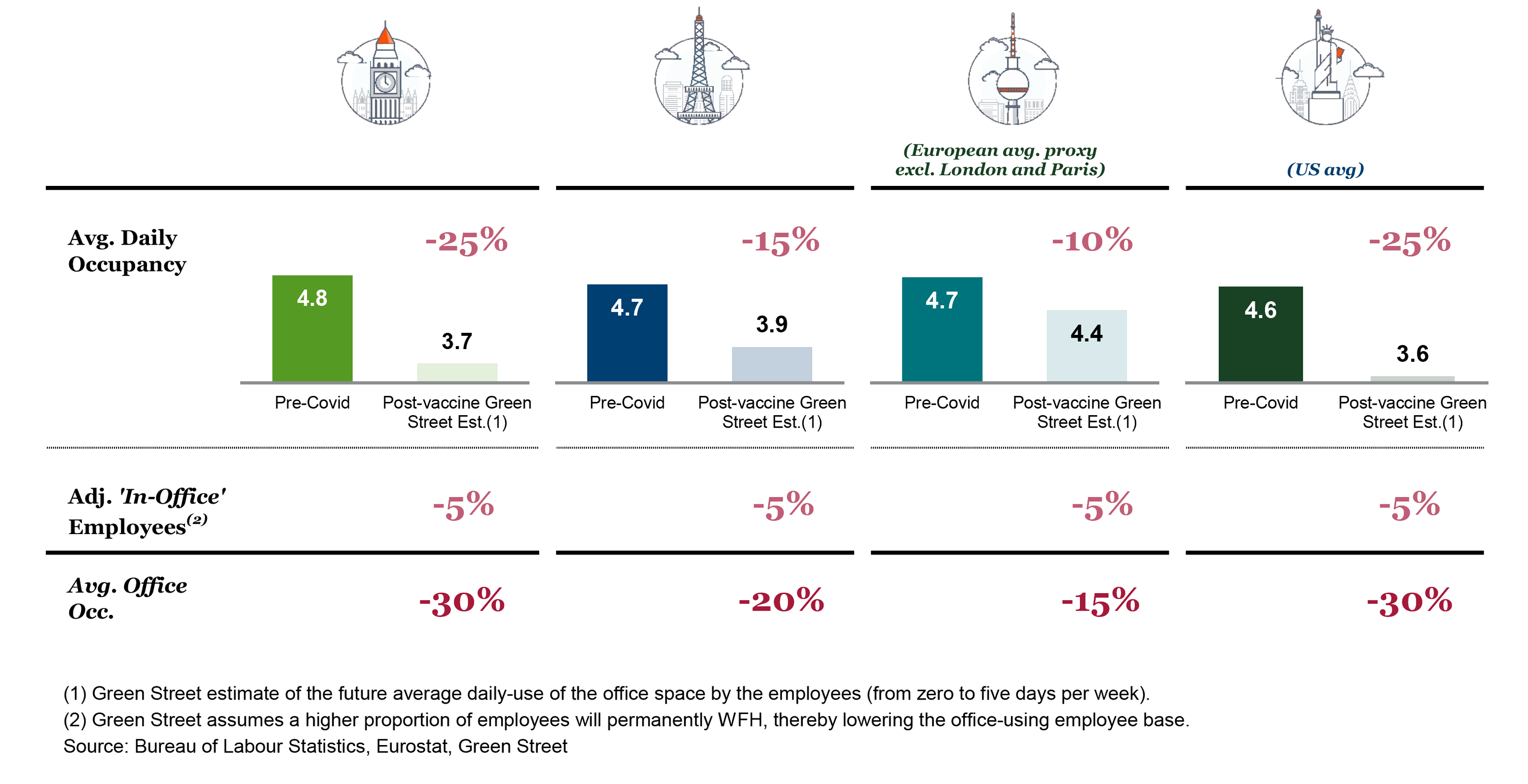 “Overall, we think that urbanization is still a tailwind for European real estate and long-term rent growth. We don’t think that much has changed because of the pandemic, with the exception of office and retail, especially in the U.K. Because of the remote working adoption rate, which we think will be much higher in London, we think those sectors are negatively impacted on a structural basis,” Papadakos said.

U.K. Office and U.K. Retail are in the bottom five of the 29 global property sectors Green Street ranks by public and private market expected return premiums over government bonds, according to our monthly Global Property Allocator.

London’s pricing may seem stretched in the public market, but React News, a Green Street company, recently reported that more than $60 billion of capital is targeting office properties in the city, which shows a vast investor group still displays enthusiasm for investing there.

Though sharp differences exist among all three cities, they share a challenge: how to manage resources for a workforce that spent more than 90% of its time in the office pre-Covid, and clearly will spend significantly less time there going forward.