Dirk Aulabaugh, Managing Director of Green Street’s Advisory Group, discusses momentum and “the first mover advantage” in non-traditional sectors. He further analyzes the first REIT owning cannabis-related industrial assets and opines on the regulatory risk and opportunity for this type of real estate.

Strong fundamental growth and heightened interest from institutional investors in the non-traditional sectors has fueled their outperformance. Institutional investors may initially be reluctant to invest in newer sectors due to mandates that limit investments to property types with more established markets perceived to offer greater liquidity. Because performance has been so strong however, investors who previously ignored these sectors have been forced to amend their mandates and allocate capital to the higher yielding non-traditional sectors. This institutional acceptance is one of two prominent periods of outperformance that investors realize when investing in a successful new sector. The other factor contributing to outperformance is commonly known as the “first mover advantage.” Initial or early investors can reap outsized returns, or a reward for investing in an unknown and perceived riskier industry. As additional investors enter the market and compete for market share, prices increase, thus driving returns lower until an equilibrium at an appropriate risk-adjusted market return is reached.

IIPR, which began trading on December 1, 2016, focuses on specialized industrial and greenhouse buildings leased to state-licensed medical-use cannabis growers. The company’s management team identified states with approved medical-use laws that they believe are not under threat of any sort of regulation risk. IIPR serves as the lone NYSE-traded REIT option for investors looking to add exposure to cannabis-related industrial properties. After its public listing, shares labored in the market for the first 12 months. However, the story has changed dramatically since then.

From inception through July 11, 2019, the market rewarded IIPR investors with a cumulative total return of 634%. Over this same time period, the Nareit All Equity REIT Index posted a 33% total return, and the Nareit industrial total return index gained 66%. Americold, a non-traditional REIT specializing in cold storage warehouse properties, was the next best performing REIT over this time period, realizing a total return of 125%.1

Americold’s performance following its public offering illustrates the first mover advantage, but also points to the importance of disclosure and corporate governance. The company attempted and failed to publicly list in 2010. While the state of the capital markets at that time may have hurt Americold’s listing chances, poor disclosure surrounding capital expenditures within the sector and poor corporate governance sealed the company’s fate for a failed initial public offering (IPO). More recently, Green Street’s Advisory Group acted as an independent strategic advisor to Americold ahead of its second listing attempt. In early 2018, the IPO was a complete success. Not only were market conditions favorable with a healthy appetite for a first mover in a non-traditional sector, but thoughtful investor messaging was also critical to its success. This included sufficient disclosure of sector best practices, effective storytelling of Americold’s strategy, and vast improvements in the company’s corporate governance structure.

Despite IIPR’s drastic outperformance over the last few years, the company underperformed other public equity REITs by 35% from July 11 through September 27, 2019. It begs the question, what happened in July? The shift began July 12, 2019, when the company announced an equity issuance at its all-time high price. It is difficult to analyze this period of underperformance. That being said, the accelerating legalization of medical and recreational-use of cannabis at the state-level appears to have driven positive results up until July.

Since IIPR’s public listing at the end of 2016, 12 states have legalized approvals for either medical-use or recreational-use cannabis in their jurisdictions.2 The company traded up by at least 20% in the 30 trading days immediately following four out of these six approval periods. Not coincidentally, the four periods that witnessed this strong performance involved states with large populations. The stock performed best after the two largest groups legalized use: in November 2018, when Michigan, Utah, Massachusetts and Missouri adopted policy (accounting for 8% of the U.S. population), and in mid-2019, when Illinois and Texas joined their peers (representing nearly 13% of the country’s population).3

The policy tailwinds are not necessarily over, however. Approximately 15% of the U.S. population resides in states where both medical and recreational cannabis use remains illegal. Demand should also increase as the historical “taboo” of cannabis wears off, and as the younger age cohorts grow in numbers and make up a larger percentage of the population. Furthermore, it is worth noting that IIPR has posted strong historical performance without any federal policy support. 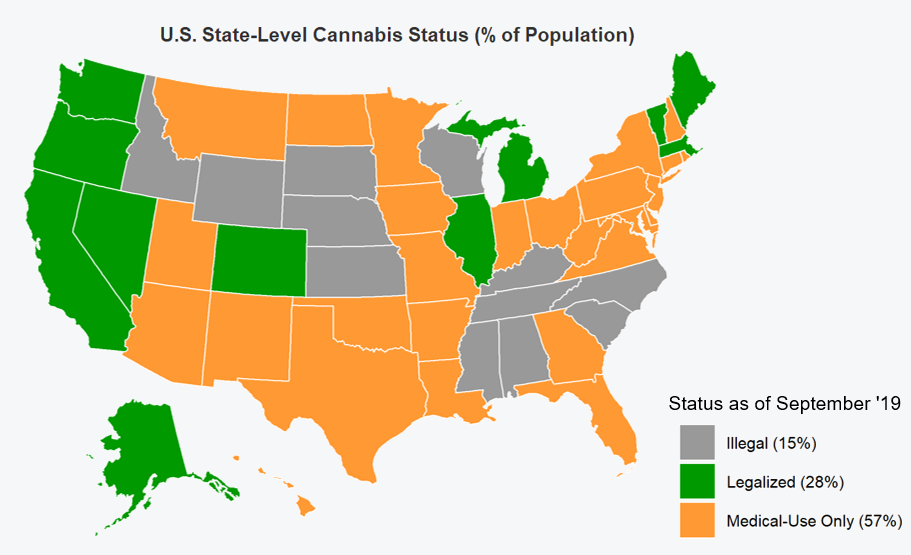 Medical-use cannabis was legalized for the first time in Hawaii in 2000, and it is now legal in 38 states and the District of Columbia. Despite the seemingly extended timeline since the first approval, state policies that adopt either recreational or medical use have gained momentum.

Green Street’s Advisory Group provides independent guidance to owners and investors around the globe. The team closely follows emerging market trends, including non-traditional sectors and commercial property types that have not yet institutionalized. Opportunity exists for these companies to attract capital and outperform comparable alternative investments, especially in the current market environment where real estate across many sectors is pricey and investors are struggling to find attractive risk-adjusted returns. However, the path to success requires optimizing strategy, structure, and communications to maximize value and assume a “best-in-class” position in the marketplace.