Amazon on the Mind

Green Street’s Dave Bragg writes about Amazon’s wide-ranging influence on commercial property markets including its impact on Seattle, challenges for retail, and benefits to the industrial and data center sectors.

Commercial real estate investors now contemplate Amazon’s impact on their business nearly as regularly as they utilize their Prime memberships. Much of the speculation today is focused on the yet-to-be-determined location of the company’s second corporate headquarters. A lift to asset values in the “winning” city is likely to be enjoyed.

However, the guessing game over the new headquarters site is rather unfruitful as a compelling case can be made for most of the 20 finalist cities, and only Amazon’s executives know which attributes are most important. Amazon’s knowable influence on the commercial property markets is wide-ranging and includes its impact on Seattle, challenges for retail, and benefits to the industrial and data center sectors.

In Seattle, Amazon has directly or indirectly accounted for approximately one-third of job growth this decade, and therefore deserves substantial credit for the outsized asset value growth witnessed across major sectors in that city. While property investors expend time and energy handicapping the competition for Amazon’s second headquarters, the clearer conclusion to be drawn from the announcement is that Amazon will be a lesser contributor to Seattle’s future growth. Accordingly, Green Street recently reduced intermediate and long-term market-level rent growth forecasts for Seattle. In most property sectors, the Seattle market still looks attractive on a risk-adjusted unlevered internal rate of return (IRR) basis. 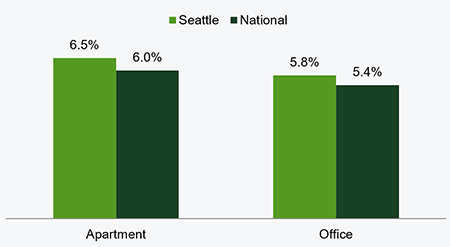 Amazon’s ever-expanding core business continues to roil the mall industry, causing retailers, landlords, and investors to increasingly reimagine the mall of the future. Malls are likely to expand entertainment and food & beverage offerings in an attempt to offset declining demand from the apparel segment, where Amazon’s growth has surged.

Regardless of the ultimate merchandizing mix, the structural change to the mall business strongly suggests that landlords will need to invest more capital to keep good properties relevant. Green Street’s retail research team recently meaningfully increased reserves for capital expenditures, a frequently overlooked input to property underwriting, for the mall sector in the United States and Europe. They also took deep dives into the outlook for ecommerce penetration on both continents.

In 2017, the public market (often a helpful harbinger of private market values) punished mall REIT shares, providing yet another example of private market investors’ ability to glean insight from signals sent by the REIT market. A flurry of M&A speculation emerged as a result. The recent merger of global mall titans Unibail-Rodamco and Westfield offered some price discovery, and more deals may be on the way in the United States, where several high-quality mall REITs are considered takeover candidates.

Amazon’s purchase of Whole Foods sent shivers down the spines of shopping center investors, as described in Alexa…Buy Whole Foods. The deal’s effect on grocery-anchored center fundamentals isn’t yet evident, but cap-ex spending expectations have risen. More turmoil surrounds the power center segment, where Green Street’s list of struggling retailers is longer than the list of those that are striving. Shopping center and net lease sector investors are closely monitoring Amazon’s broader health care ambitions, including reported plans to enter the pharmacy business, which would threaten key drug store tenants.

Not all thoughts of Amazon provoke anxiety for property investors. A surge in ecommerce-related demand, led by Amazon, has driven the industrial sector’s multi-year outperformance in the public market. We expect the industrial sector’s fundamental tailwinds to continue for the foreseeable future. A similar trend is evident in the private market, as reflected in Green Street’s sector Commercial Property Price Index® (CPPI). Industrial has been the big winner recently. 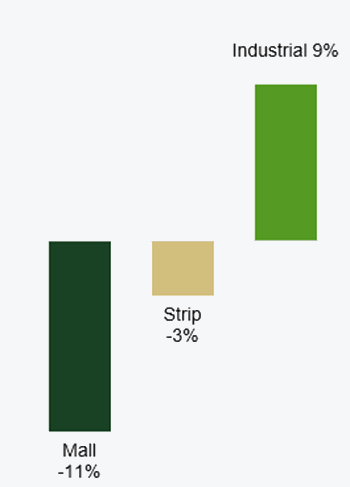 Green Street recently introduced the concept of sales productivity, a traditional retail metric, to the industrial real estate world by comparing Amazon and Walmart. The just-published 2018 U.S. Industrial Outlook takes an in-depth look at the largest industrial markets to help identify characteristics that may affect future investment performance across the top 50 metros and over 400 submarkets (view sample market snapshot).

Tailwinds for Data Centers
The other darling of the REIT sector, data centers, also benefits from Amazon-driven demand. Equinix, the world’s largest data center landlord, was recently added to Green Street’s coverage universe. The company and its peers have received a boost from demand for cloud computing thanks in large part to Amazon’s AWS business.

Amazon to Remain Top of Mind
Green Street’s analysis of the aforementioned Amazon-related issues resulted in actionable sector and market-level insights for public and private market property investors. Given the company’s known (and unknown) ambitions, more insight will be forthcoming as Amazon remains top-of-mind for Green Street’s research team. Contact us to learn more.

In-line Tenant Trends within the Mall Sector – A Special Analysis from Green Street’s Advisory Group
Green Street’s Advisory group recently published a white paper containing an analysis of hundreds of national mall tenants in 950 mall locations. The analysis evaluates the impact of store closures, both announced and unannounced, at malls across the quality spectrum. The study found that over two-thirds of malls suffered a decline in the number of national retailers. Lower-quality centers were especially hard hit by closures.

• Exclusive interview with co-founder Mike Kirby: Where to Shop Now?

• Blog: Industrial - The Ugly Duckling, or a Beautiful Swan?