“If we look to the past on how the public markets have treated real estate, 2022 could be considered Annus Horribilus for real estate investors across all sectors.” Those were the words Green Street analyst Rob Virdee used to describe the state of Pan-European commercial property during a recent Green Street webinar entitled, Pan-European Industrial & Office Webinar: Walking on Egg Shells.

Why has the past year been so challenging for many commercial real estate institutions? If Green Street had to point to one macroeconomic factor it would be: inflation. Record levels of inflation have sent interest rates skyrocketing, prompted a 15% decline year-to-date for average-quality assets, and have caused capital markets disruption for the better part of the year.

Office Sector: Feeling Empty Inside (Many Buildings)
Annulus Horribilus has most notably manifested itself in the Pan-European Office sector – both in terms of public market real estate and privately held assets. According to Virdee, the Office sector is going through “a fundamental change” from a supply-and-demand perspective: Office-using professionals have been unwavering in their mass exodus from buildings to their new work from home (WFH) environment, post-pandemic. Covid-19 fallout severely dampened demand for office space across Europe. Since demand for office is highly correlated to office-using jobs, it’s not shocking that demand has plummeted since March 2020.

There is also ongoing bifurcation between Class A and B assets: Highly amenitised Class A office stock with environmentally friendly, or “green” features will fuel tenant demand, while demand for Class B stock should lag in 2023. In fact, demand for average-quality office assets in the Top 30 European cities will remain subdued through 2024, according to Green Street forecasts.

Further complicating the demand scenario, Green Street analysts have witnessed anecdotal evidence of rising construction and debt costs, making it more difficult for owners and operators to take out construction loans for new developments – and it has also put a halt on the spec office development market.

“Since the summer, we have seen office transactions struggle to get across the finish line in the biggest metros: Berlin, London and Paris,” Marie Dormeuil, a Green Street analyst, explained during the Walking on Egg Shells webinar. A paucity of deals and liquidity drying up prompted Green Street to recently revise its office values lower for the remainder of the year.

Industrial Slowdown Not Eminent
Similarly, the year was equally painful for the Pan-European Industrial sector, as major cracks began to appear in the sector’s shiny veneer. Green Street began downwardly revising its industrial numbers in April 2022 when Amazon signaled it was putting the brakes on signing new leases for warehouse space (primarily in the U.S.), said Virdee.

E-commerce is the biggest structural tailwind for the Industrial sector, and fundamentals will soften next year before they begin to improve in 2024. “After the blowout pandemic years, where online sales demand exploded, some pullback in growth was – and is – warranted,” Virdee said.

The industrial sectors sharp initial yields and corresponding long-duration made it susceptible rising real rates. Overall, average-quality industrial property values dropped 13% over the past 12-months and 20% from the May peak, according to Virdee.

Nonetheless, “tenant demand for industrial space remains unabated,” despite the decline in industrial property values, Virdee reported. “Take-up has been solid across Europe at an annual run-rate of 10% of total stock, or about 16 million square meters this year – on par with the record year of 2021. Geographically, take-up in Central and Eastern Europe is double that of Western Europe given the logistics market remains in its infancy (in that region).”

“E-commerce’s value proposition of price transparency could come to the fore in a recessionary environment, which would suggest upside to our figures,” he added. While industrial supply growth stands at 9% currently, Green Street expects it to fall meaningfully by the end of 2024. As demand peters off, the average Pan-European industrial vacancy will nudge up towards 4% in 2024.

Pan-European Markets with the Highest First-Year Yields
While current Green Street subscribers can access a host of new information under the Market Data & Deals tab on our client web platform, during economic uncertainty, many market participants search for metro areas featuring the highest yields. To that end, Green Street has analyzed the top five markets for first-year net yields in the Industrial and Office sectors.

Here are the top five markets for initial industrial yields out of 30 Pan-European markets:

Here are the top five markets for initial office yields out of 30 Pan-European markets: 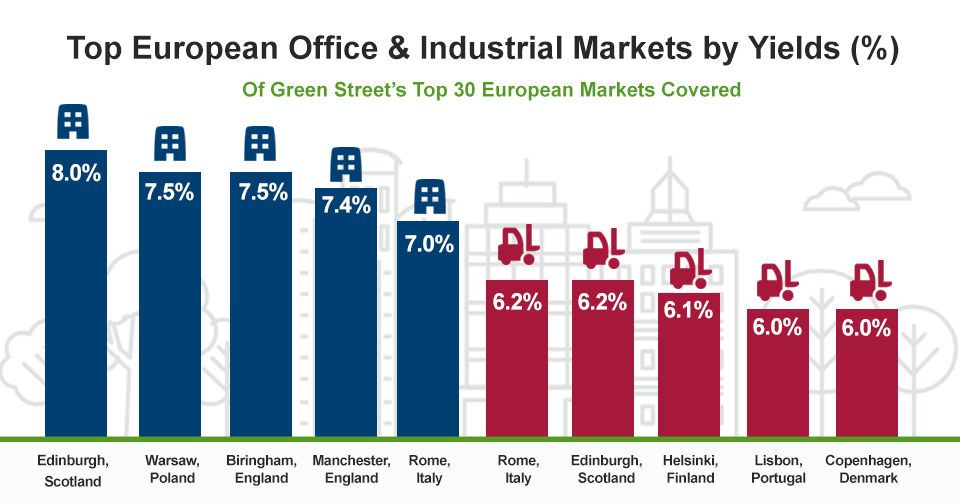 Analyzing Top-Ranked Edinburgh
Since Edinburgh ranks in the top five markets for both industrial and office yields, Green Street dug a little deeper into this burgeoning Scotland metro. According to Green Street’s most recent Industrial Market Snapshot, Edinburgh’s Market Grade ranks as a “B” based on 10 factors that measure the health of the market, including supply barriers, fiscal health, business friendliness, climate event risk, and more.

In terms of Market Metrics, Edinburgh ranks in the top 10 among 30 Pan-European markets for 1) average gross rental income, 2) occupancy and 3) average household disposable income. On the other hand, Edinburgh struggles with 1) year-over-year job growth, 2) GDP and 3) population, placing in the bottom 10 metros for those metrics.

Some markets with the highest yields also feature the best operating fundamentals in Europe, particularly in terms of near-term occupancy and effective rent growth, or M-RevPAM. These regions –Warsaw and Prague ­– comprise two-fifths of Green Street’s market expansion.

Similarly, the office markets with the highest yields feature relatively healthy operating fundamentals, although occupancy and rent growth are nowhere near the double-digits like their industrial counterparts. By year-end 2022, Green Street expects these five office markets to register the biggest M-RevPAM gains:

For more information on supply and demand fundamentals in the Industrial, Office, Residential and Retail sectors in Europe, watch this video.